I talk a lot about the process of exploring and discovering in my work. Indeed, my MFA Thesis Show was all about giving a full context of how I go about adventuring, prospecting, developing, and ultimately making pots from the stuff I find. 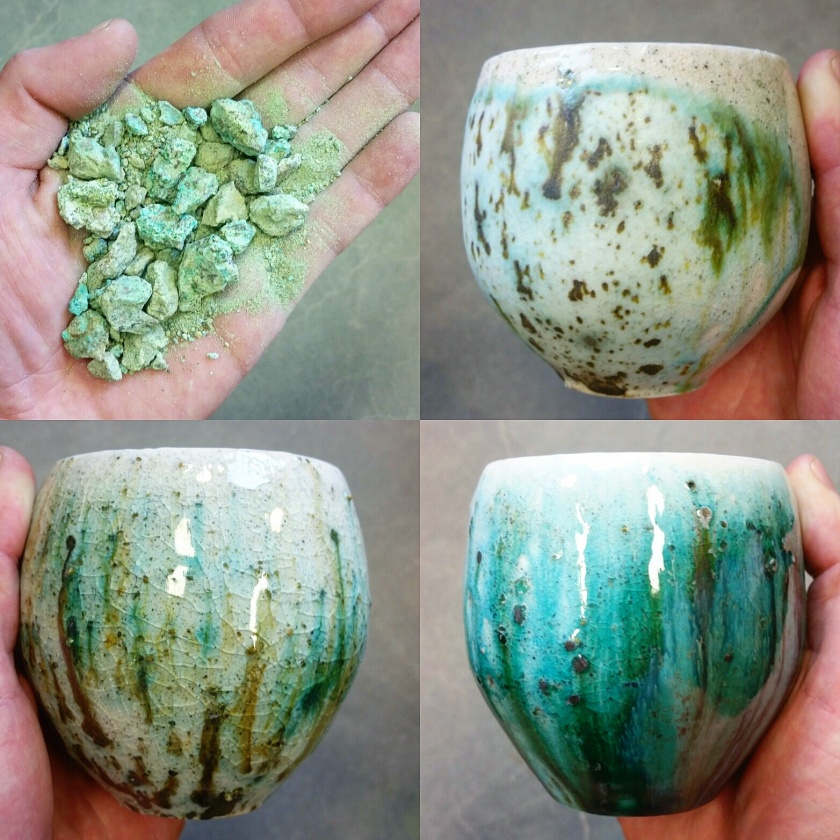 I love the idea of being an alchemist – and I describe myself as someone who uses mineralogy, chemistry, and fire to forge beautiful objects and glazes. But I have to admit that more than anything, discovering the really compelling stuff is mostly a matter of luck, circumstance, and time. It’s very labor intensive, and I’d guess that for every 10 rocks I bring into the studio, it’s usually only one or two that have any real practical value in my work. I suppose that given enough time and enough firings, one could utilize just about anything under the sun… but in the real world there’s just never enough time – or test tiles! 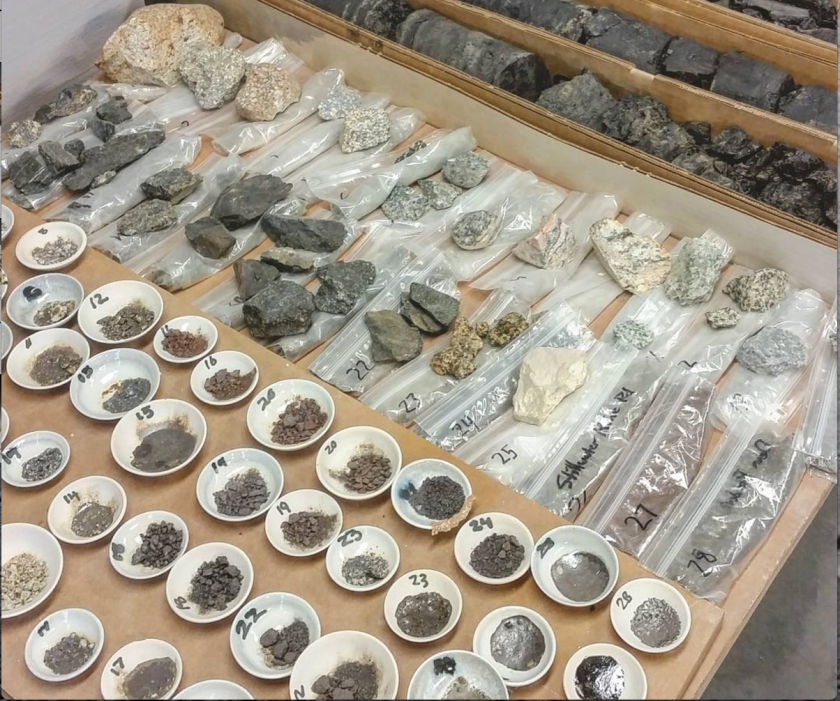 Collected and Melted Materials from near Red Lodge, MT

In this post I thought I’d share the background of the material that I’m calling Copper Sand. It can be summed up in a single sentence: “I was adventuring in the Utah Desert and found some mysterious green dirt which I collected and put in a 5 gallon bucket, then after not immediately being able to use it as a glaze, I tried, tried, tried, and tried some more to find a way to use it.” The longer version of the story starts the summer earlier. In looking around the internet and researching Kaolin materials, I surfed around and found mentions of mining activity near Eureka, Utah, for a somewhat exotic Kaolin-like mineral called Halloysite. Halloysite is a mineral of great interest to material scientists, as it’s chemically identical to Kaolinite,(Al2Si2O5(OH)4) but rather than having a plate like molecular structure, it’s shaped like tiny tubes and needles. 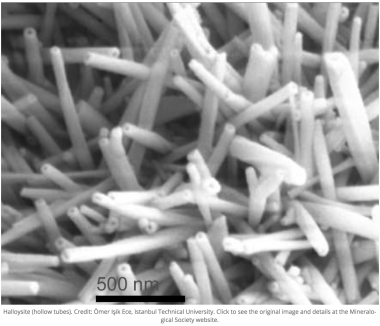 For many years Halloysite was used primarily in industry as a cracking catalyst in petroleum refining. Nowadays it’s being researched in a whole range of commercial and scientific applications. Of course after reading about it being mined in Utah, I wanted to get my hands on some. After a few emails went unanswered, I did what I recommend to anyone in this kind of thing – I just showed up! I met the right person at the right time and eventually got access to some very cool places and some very, very cool materials. 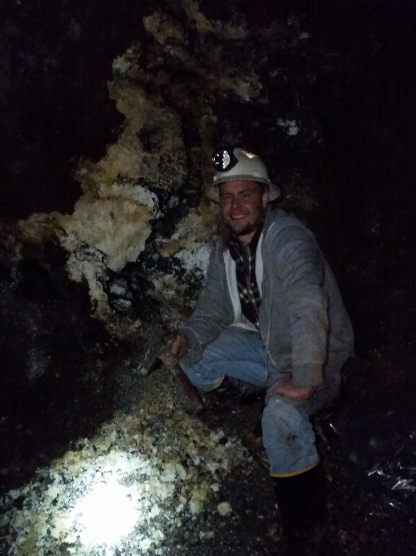 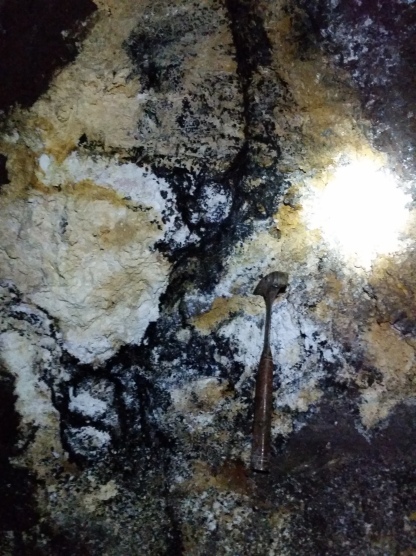 The next summer, I planned a week-long digging and fishing excursion throughout west Utah. I thought I’d begin my trip from Eureka, and after calling my friend, it was decided that we’d meet up and head down to Topaz Mountain. We both wanted to go check out some old Flourite mines in the Thomas Mountain Range.

On our trip, we were accompanied by a geologist who was an old hand in Nevada gold fields, a rockhound, and a hell of an interesting guy. I mentioned to him that I had plans to drive around rockhounding and asked if he knew where I could find some copper. He started rattling off a bunch of places and told me that in the 80’s, his mineralogy field trip went to The Old Maria Copper Mine and they found all kinds of flashy malachite and chacopyrite among the piles of old copper ore tailings. It was a few hours south, and seemed like an interesting place to go poke around. I pulled out some maps, he pointed to the vague area, and told me to go drive and look around. And that’s exactly what I ended up doing.

Here’s a video from one of my camps near the Wah-Wah Mountains in Utah.

Outside of Millford, where the geologist had pointed out the old mine – I was surprised to find a very large and very active copper mine. After driving around and staying outside of fences and no trespassing signs, I drove up to the security gate. I mentioned that I was a geology student from USU, was interested in the mining activity area, and wondered if the foreman or anyone had any time to show me around or give me any info. The answer was a definitive “No.” 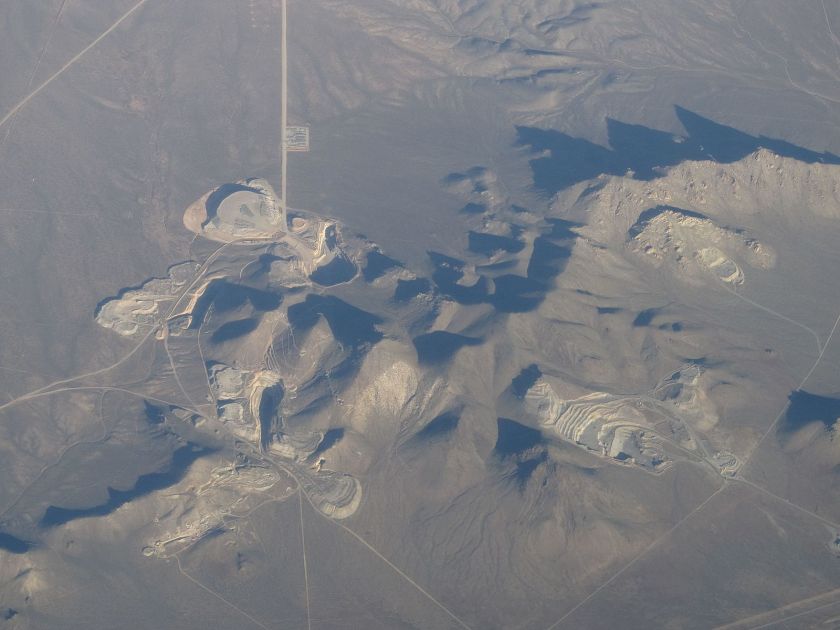 After a few more questions, I pointed to some old buildings and tailings piles and asked if I could poke around. To my surprise, I was told, “Yea. You can help yourself to any of that stuff. Just stay out of the buildings, don’t touch the generator, and don’t do anything stupid.”

I spent a day slowly working through the piles of boulders (tailings), finding a whole range of malachite, azurite, chrysocolla, arsenopyrite, chalcopyrite, calcite, and quartz samples. 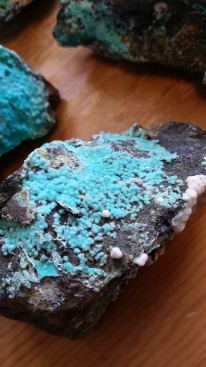 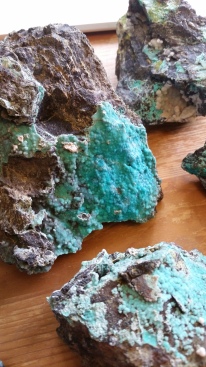 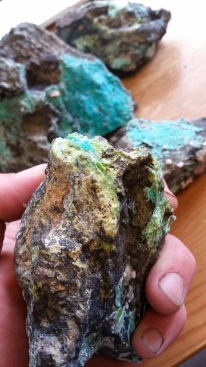 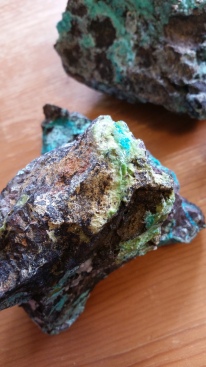 I wouldn’t say that I found any truly world class samples, but there was interesting shit everywhere! It didn’t take long to run into the classic rock hound conundrum – finding way more than the vehicle weight limit. 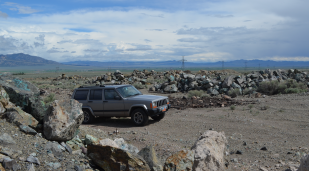 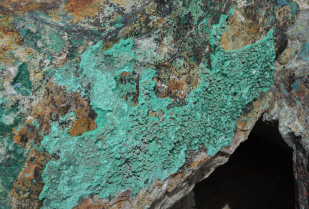 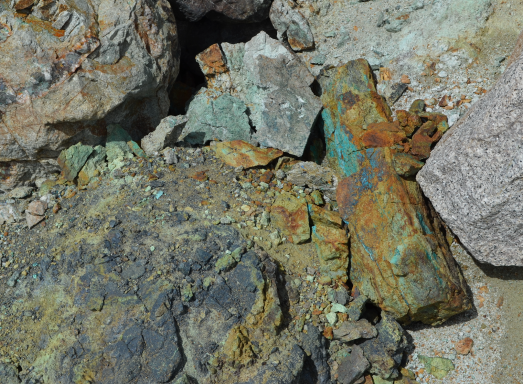 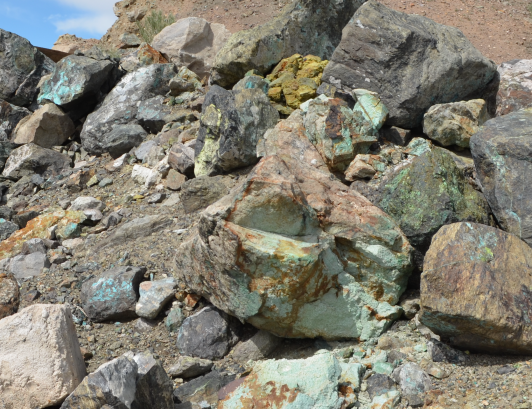 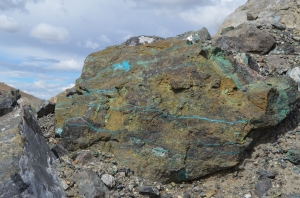 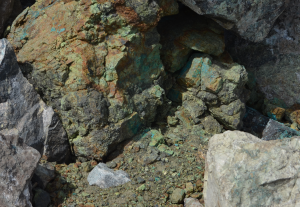 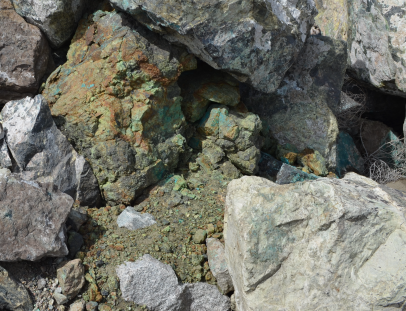 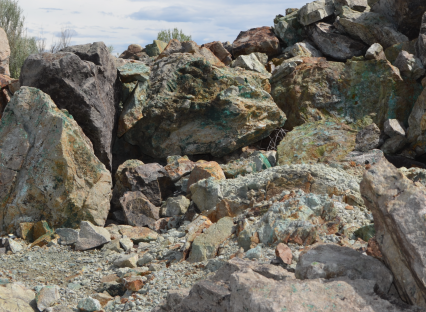 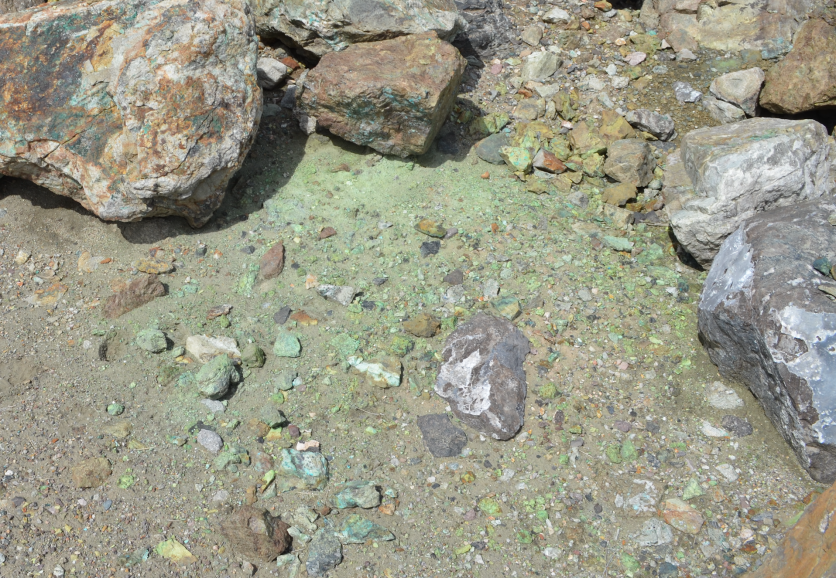 Throughout the piles, I kept finding bright yellowish green rocks that were soft and weathered. Geologists describe these rocks as ‘friable’ and they crumble readily. Having had, now, enough experience hammering boulders into gravel with a sledge hammer, I tend to seek out friable materials and places where mother nature or mining activity have already given me a head start on the milling process.

With my jeep packed to the gills, I grabbed a 5 gallon bucket and filled it with the weathered, disintegrated green sand from a particularly bright green rock. I was thinking at the time that it might just make for an interesting glaze (honestly, I think this about every material I collect!). I had no idea what it was exactly, but it had me curious, and that’s really the only thing one needs. 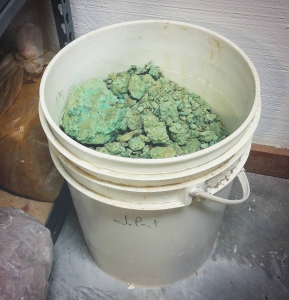 Back in the studio, I went through my usual process of melting, experimenting, and researching. Fusion tests suggested a material with a lot more copper than I expected. Analysis showed peaks of Magnesium, Iron, Copper, Titanium, Zinc, Silver, Lead, Calcium, Sodium. There’s a lot going on with the composition and chemistry of this bucket of material, and if I were to crush it all and blend it, I might end up with a mixture that’s something like:

With the initial melt tests and info I’d gathered, it became obvious that it wasn’t going to be as simple as ball milling it and then dipping pots into whatever came out. One of my last glaze firings in Utah was a soda kiln with about a dozen porcelaineous stoneware cups with this green copper material wedged right into the clay body. I used a few glazes on hand; a celadon, an oribe, and green salt. They all came out looking like pure hot trash! Crusty, pitted, pinholed, metallic charcoal black – not the surfaces I was interested in at all. I needed a new glaze and a new approach. Unfortunately, it had to wait for the dust to settle from my graduation, and move from Logan, Utah, to Red Lodge Clay Center in Montana.

For the past few months I’ve worked on the aesthetic and technical issues of incorporating course rock materials into porcelain clay and high temperature glazes. It’s taken about 7 series of cups to find a process that works for me. In the first series everything was too dark, too much copper, incompatible glazes, pinholing, cracking, etc. In the second series I sieved and measured the material before wedging it in, and tried new glazes – results were better, but pinholing and foodsafety was still an issue. The 3rd and 4th series were about more refinements in sieving, measuring, incorporating and and wedging, but this time I lined the greenware cups with porcelain slip thinly, then thickly. I also tried a few new glazes, had a better firing and payed closer attention to glaze application. The results were better, but the interiors were still pinholing and cracking.

With the fifth series, I didn’t wedge in the material, but made a viscous, partially deflocculated slip with a handful of copper sand blended in. I dipped the cups into the slip, leaving the interior as bare porcelain clay. Results were better, again, but getting the slip mixed and applied right was tricky business.

With the 6th series, I tried mixing the material into a shallow bowl of deflocculated slip and using a brush to apply the rock/slip mixture. I also improved my glazes, settling on a white, blue celadon, and oribe glaze. Results were better yet.

In the 7th, and most recent series, I made and bisque fired the bare porcelain cups. I then brushed on a mixture of rocks and glaze using a hake hair brush and a series of shallow bowls that I could mix in varying amounts and grain size of rock. 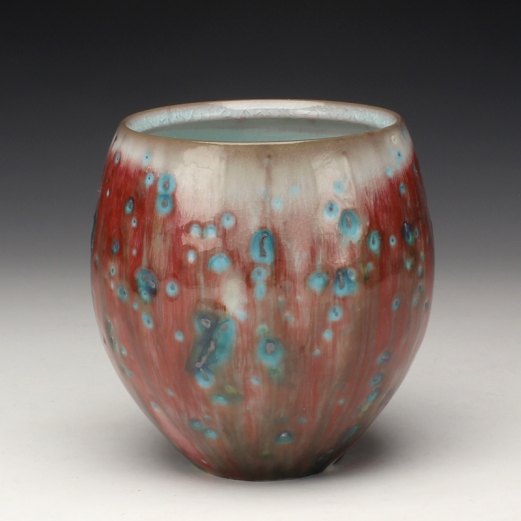 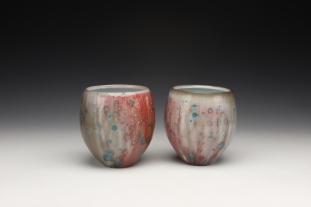 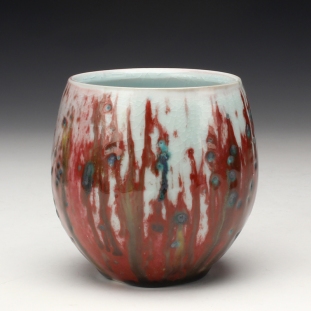 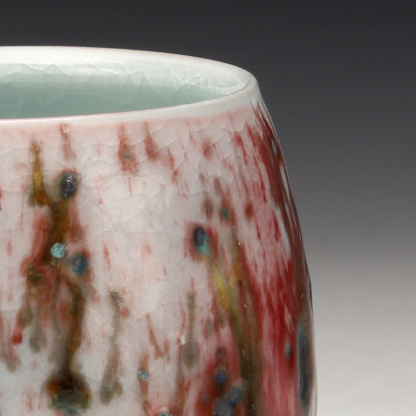 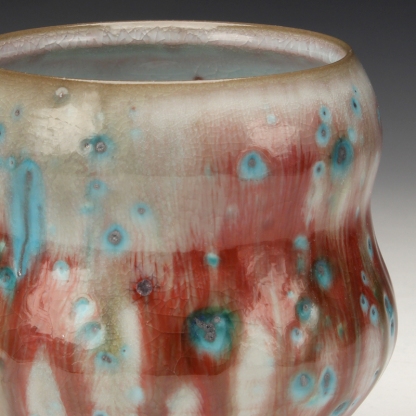 So that’s about where I’m at now. I’ve got a lot of things dialed in with this last round of pots, and in the next few series I’m going to to be exploring heavy reduction, heavy carbon trap soda firing with these reduced copper red colors. I’m also planning to sneak in an oxidized oribe firing for some bright vivid blues and greens.

My name is Matt and I'm a potter living in Southeast Alaska. I've been an artist/teacher/potter for the past decade, and I got my start in ceramics in high school some 18 years ago. These days I make my living selling wheel thrown pottery that sits at the intersection of ceramics/science/mineralogy/and geology. View all posts by mattfiske

Past Posts By Date