Hello Again! It’s been quite some time since my last post. Gotta thank those of you who have contacted me with interest and suggestions! With so many summer projects and school stuff, it’s been very difficult to put my full efforts into any one thing… but life is what happens while you’re making plans.  Anyways, enough with the excuses.

Over the summer I had the time and energy to figure out an acceptable firing schedule in our new Blaauw kilns.  For as much as I love their sleek and sexy design, computer controllers, and top of the line hardware… you can’t look in the damn things while they’re firing. This poses several challenges for control freak oil spotters. Usually, the idea is to firein complete and total oxidation, going slowly through cone 7,8,and 9 to allow thermally reducing iron to bubble up through the glaze and cause the surface to crater or foam. By carefully monitoring the situation inside the kiln, and by pulling out glazed pull rings, the firer can increase the temperature slowly and fire until the glazes have significantly ‘healed over’. This isn’t really an option, so as a result a much more empirical approach was needed to find a good fit.

Once that was established, I began with some of my favorite tiles from my initial 2 rounds of oilspot base glaze recipes. My favorites:

With these base glazes I began mixing, blending, and layering, and combining glazes with dipped, poured, and sprayed application.  On a whim I decided to experiment with some of my manganese saturate glazes, and that’s when things started to get really interesting. There is admittedly one glaze in particular that I’m not sharing, but with a little diligence and some wet blending, a seriously motivated glaze experimenter can discover this glaze by  looking at my old posting on my OSII series. Blend them all in 50/50 proportions and you’ll get the elusive but beautiful  GF glaze. Hell, it might even be on my blog somewhere. That’s all I’m saying for now – I’d hate to rob anyone of the learning experience… Hah! =)

Recently I was contacted by the British potter Allen Richards who has done some pretty extensive research into lustrous gold glazes. He suggested that I try small additions of Vanadium Pentoxide. These glazes feature 2 amended manganese saturate glazes in combinations with the usual oilspot suspects.

Here are some videos of some of my latest results. None of these particular tiles have Vanadium pentoxide.  As time goes by I’ll try to annotate the combinations MS corresponds to Manganese Saturate.

Started out with Kamada Koji’s big bang glaze in mind. I’ve been completely obsessed with all glazes iridescent for some time now. This is my favorite variation to date… but still too subtle and elusive. Closer than I was, but still a lot of room for improvement. 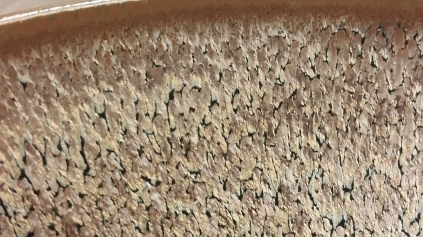 This is the glaze I’m calling Fiske GoldFur – which came from a blend of some variations on a fake Mashiko with calcined redart, and a variation of a Britt oilspot with local black dolomite.

The center action of the GoldFur piece.

Some combination of some variations of variations. 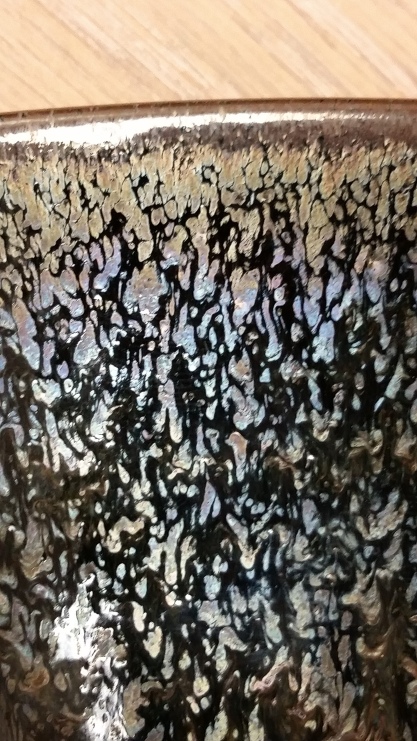 Started out with Kamada Koji’s big bang glaze in mind. I’ve been completely obsessed with all glazes iridescent for some time now. This is my favorite variation to date… but still too subtle and elusive. Closer than I was, but still a lot of room for improvement. 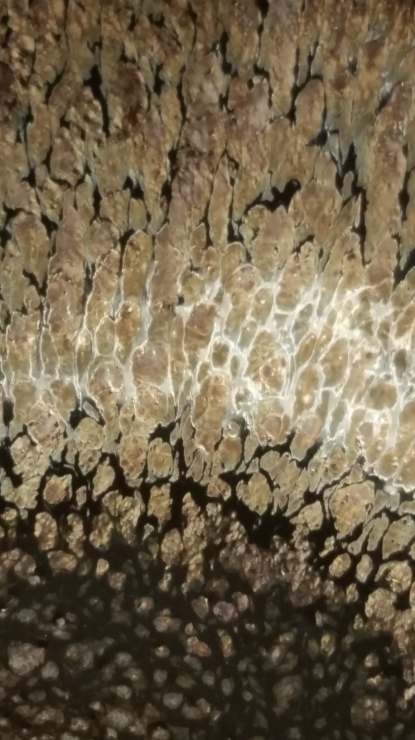 Another angle of the GoldFur piece. Getting closer and closer to something completely new and completely incredible.

Dolly Varden Char
Snapshots from Summer in Alaska!
Kauai did not disappoint! It's a weird world, but the Aloha spirit is alive and well! #kauai #hawaii
See if you can find the campsite!
Absolutely epic 3 day backpacking trip. Kalalau trail is a wild 11 miles.
Lihue, HI
Anchorage Airport
Just released some fresh fish that are heading down to Red Lodge Clay Center. You’ll be able to catch them at the upcoming Anniversary show, which will feature work from 15 years of resident artists!
Another give away! If you'd like a chance to win this one, head on over to my Twitch channel at twitch.tv/bluepotter where I can be found making stuff live in my studio a few days a week! You can also watch recordings of me chatting with viewers and working on various wheel projects
Wanna get your hands on this sweet little baby!?

Past Posts By Date